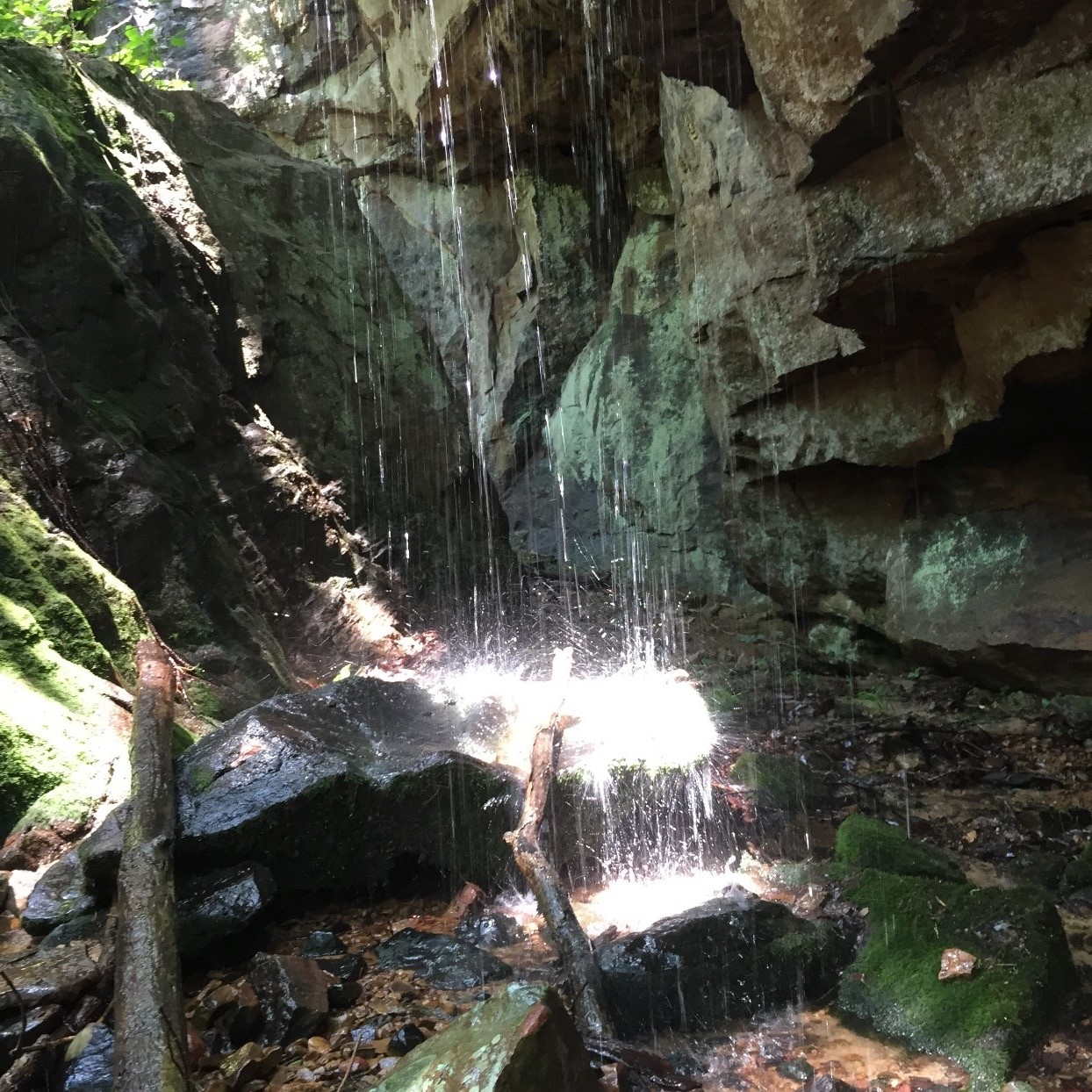 This article was generously submitted by one of our readers, Stuart Obermann. With the exception of the "Buzzy" photo, all photos belong to him. Thanks, Stuart!

Buzzard Falls is a new trail on Green Mountain in South Huntsville.  Green Mountain is known by many in the hiking and trail running community for its popular trails on the north end, including the Fanning and Varnadoe Trails in the Blevins Gap preserve.  However, few people know much about the equally beautiful areas both above and below the bluffs at the south end of Green Mountain.

A new series of hiking and running trails are under development in this area, the first completed trail being Buzzard Falls.  These trails are on both private property belonging to the Oak Bluff community and tracts owned by the Land Trust of North Alabama.  Buzzard Falls is a moderately strenuous trail that includes a relatively steep climb down the bluff over rocky and often wet terrain.  It is a loop of about 1 mile in total length, but connects to a much longer and highly strenuous trail that descends down to the valley floor.  Many additional routes have been scouted and are coming along nicely. More than two miles of trail are anticipated complete by early 2016 connecting both new and existing Green Mountain trails.

The Buzzard Falls trail begins and ends in the Oak Bluff residential subdivision on the south end of Green Mountain.  From Bailey Cove Road, take Green Mountain road to the top, turn right at the fork on S. Shawdee Road, then left on S. Village Square Road, right on Monte Vedra, then left on South Bluff Trail to enter the subdivision.  The trail has 2 entrances off of South Bluff Trail, the first being directly across the street from the stone Oak Bluff subdivision sign, and the second at the end of the cul-de-sac.  You can enter from either end but this overview assumes you enter the trail from the cul-de-sac.  There is a Nature Trail sign marking the trailhead. 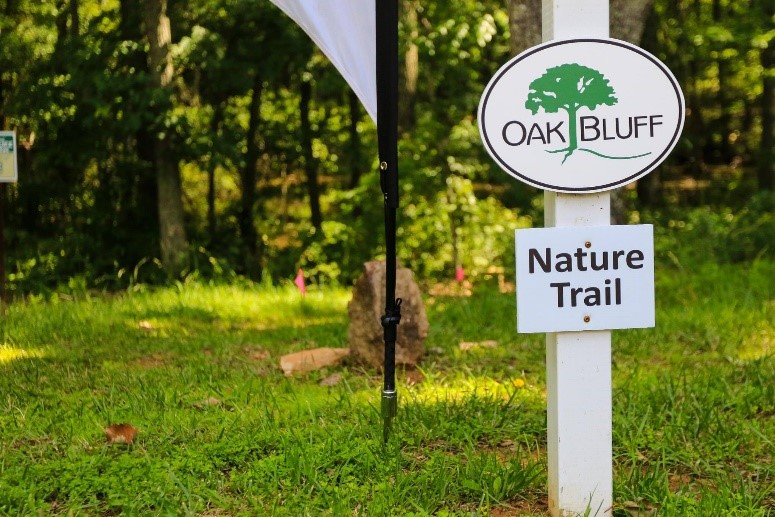 Entering the north trail head takes you through a preserved common area of the subdivision, and along a 1 acre wetland which is part of a certified wildlife refuge.  Here you will find the first of a number of benches for those less adventurous or someone just wanting to take a break after climbing the more rigorous portions of the trail.  Following the trail takes you along a creekbed which leads towards and then down the bluff on the east face of the mountain.  This is a fairly steep and tricky climb, which crosses the creek bed several times and descends about 120 feet to the first bench below the bluff.  Be cautious on the rocks – slippery when wet!

The trail then turns south and runs parallel to the bluff for about 1/2 mile, passing through dense forest and boulder fields.  It then winds back up towards the base of the bluff near a stream where in wet weather a small but beautiful waterfall flows onto the boulders below.  The height of the falls is approximately 20’ and during periods of wet weather the flow can be significant.

Past the falls, the trail then continues south along the base of the bluff through an area with many large boulders forming corridors and cave-like structures.

Shortly after the falls, the trail turns right and into a ‘rock cut’ area which provides a surprisingly easy climb back up to the top of the bluff.  It climbs along a ridge overlooking the limestone outcroppings, crosses the stream that flows to Buzzard Falls, and follows this stream back to the top of the mountain.  This trail emerges at the south entrance to the Oak Bluff subdivision, where you can then turn right and walk ¼ mile along South Bluff Trail to the trailhead.

Why the name Buzzard Falls?

This trail was developed by avid outdoorsmen Cary Long and Kenny Duff, two residents of Oak Bluff on Green Mountain, who wanted to forge trails to allow others to explore the beautiful streams and rock formations along and below the bluffs at Oak Bluff.  While marking off the original trail, they came across a series of large limestone boulders that had tumbled down from the bluff, forming cave-like formations below.  One particular formation was being diligently guarded by a large indigenous Turkey Vulture, or Buzzard.  Upon inspection of the ‘cave’ below, the trail blazers found a lone buzzard egg lying on the bare ground as pictured below.

Later that year, at the ‘grand opening’ of the trail for the running community hosted by Cary Long, a photographer captured the progeny of the mother Buzzard who had been keeping careful watch over the egg for months.  The baby buzzard has been dubbed “Buzzy” by the locals who frequent the trail, and today Buzzy can be seen soaring on the air currents above the bluff on Green Mountain looking for his next meal.

Special thanks to Cary Long and Kenny Duff for trail development and maintenance.
Photo of “Buzzy” courtesy of Gregg Gelmis of We Run Huntsville.
Review and other photos courtesy of Stuart Obermann and Oak Bluff on Green Mountain.