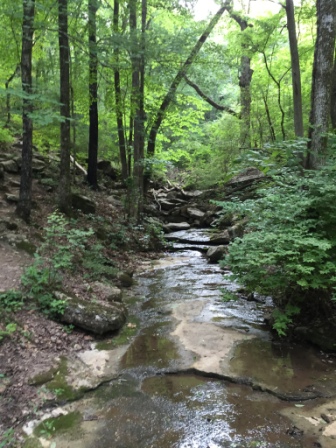 No matter what Madison does it will always be over shadowed by Huntsville which literally surrounds it as if to swallow it whole.  Everything in Huntsville is bigger and some would argue better with three notable exceptions; hot wings, BBQ, and a far superior school system.  (The prior statement is the opinion of the writer of this article and not the views of Huntsville Outdoors.com.  But if the web server starts to generate opinions the machines have become self-aware and we all should be worried).

Truth is, the mountain being named Rainbow is actually a mistake.  It was supposed to be named Rainbolt Mountain after the original owners of the land in the 1800's.  This isn't the only instance of this happening in Northern Alabama.  The city of Arab was actually supposed to be named after the founders son, Arad, but because of a mix up in the spelling at the post office it was named Arab.

With only 157 acres and less 3-1/2 miles of trails (compared to Monte Sano's 4,000 acres and countless miles of trails), you could see why Rainbow Mountain might have an inferiority complex.  In spite of that, I am going to attempt to channel my inner Portlandia and make a hipster-esque argument because right now, I am really digging Rainbow Mountain despite the fact that you’ve probably never heard it.

The Mountain is in the heart of Madison, off Hughes Road, near U.S. 72.  To access the trails you have two options.  The first is the main trail head off of Stoneway Trail where there are two parking lots.  One is a new paved lot that you can’t miss.  The other is just bit further up the road next to the large water reservoir where there is a gravel parking lot.  The other access point is less known and hidden like a speak easy in a cul de sac at the end of Oakhurst Drive, which seems very hipster to me.

The two main trails, Rainbow Loop and Ja Koo Moo (wth?), are marked very well and at certain intersections there are maps as well as signs pointing you to the exit.  On the lesser trails, Spring and Wild, it can be hit or miss.  Based on some well placed brush and logs as well some flagging you can tell the Land Trust is attempting improve the trails and prevent folks from getting lost, which I will admit once happened to me.  (Edit- it happened to your other two Huntsville Outdoorsmen as well, one rainy night in January).

Rainbow Loop Trial is the main trail from which you can access the four other trails in the preserve.  It has two starting points in relatively the same area, which is the paved lot, via a playground with equipment that is past its prime.  The other entrance is from the old gravel parking lot next to the water reservoir.  The latter is the entrance that I prefer because it’s the original parking area, which is retro and of course that makes it quite hipster.

From the gravel parking lot you start south; it's a relatively easy part of the trail.  Within the first 1/4 of a mile you reach most recognizable feature that Rainbow has to offer, the Balance Rock.  If you are so inclined, you could climb down to it, but do so at your own risk.  There is also bench here that in the winter - when the all of the leaves are gone - offers a nice view of the City of Madison.

From there, you continue your southern trajectory where at 1/2 mile in it starts to get rocky as you turn north to descend down the east side of the mountain.  When you reach the bottom, you come to the intersection with Spring Trail at 3/4 of mile.  From there you start to make your way back up toward Ja Moo Koo Loop Trail reaching the first entry point for it at 1-1/10 mile and the 2nd at 1-1/4 miles.  Then the trail turns southeast toward the entrance, meeting up with the end of Spring Trail at 1-3/10 miles before continuing on to the retro playground.

With all of the rocks, roots, and inclines throughout the trail it proves to be a challenging and technical trail.

The Ja Moo Koo trail acts an extension of the Rainbow Loop Trail by adding an extra loop to the north eastern section.  Coming from the Water Reservoir/Balance rock entrance of Rainbow Loop Trail you will reach the Ja Moo Koo Trail head just after one mile where it bears north, eventually looping back south, for a total length of just under one mile where it returns again the Rainbow Loop Trail.  The trail itself offers some very aggressive and rocky climbs with certain parts being not so easily navigable, requiring you to keep your eyes peeled so you don't wander off the trail.

The Spring Trail has four entry points: two from the Rainbow Loop Trail, one from the top of the trail, and the other near the beginning.  There is a 3rd entrance from the Wild Trail, and the final one is off of Oakhurst Drive.

The best way to experience it is from a cul de sac at the end of Oakhurst drive at the base of Rainbow Mountain. From this starting point you climb to the top of mountain, gaining 230 feet in just 4/10ths of a mile. A majority of short distance is spent running parallel to a normally dry creek bed with slabs of rock that produce a beautiful waterfall when it rains.

The first 10th of a mile is very easy with not much climbing and few rocks to worry about. Here is where the trail intersects with Rainbow Loop and you start an aggressive climb. The creek is on your right as you make you way to the top.  It is very steep with a lot of rocks, requiring some very technical running if that's your thing. I would not recommend novice trail runners attempt to run down it unless they are okay with breaking bones. Just before the end it intersects with the Wild trail and then terminates when it reaches Rainbow Loop Trail.  If you can search arond the top of the trail for Spring that the trail is named after.

This is short but difficult trail.  It starts near the end of the Spring Trail close to Rainbow Loop Trail.   The easiest way to get there is by starting on Rainbow Loop Trail entrance at the small playground and taking that to Spring Trail.   You can also get to it via Rainbow Loop Trail water reservoir entrance, but it is not very well marked from that side.  What The Wild Trail lacks in length it makes up for in relentless ankle breaking rocks.  It’s a fun trail but you must be very aware of where you feet are at all times.

There really are no easy trails.  Each one is full of rock obstacles and aggressive climbs. That’s what Rainbow Mountain is.  A beautiful little mountain in the heart of a little brother city.  The Scrappy Doo to Huntsville’s Scooby Doo.  But just like Scrappy Doo what it lacks in size it makes up for in tenacity and spirit.

I do understand that writing an article about how something is hipster that it is no longer hipster.  But then again, I'm not even sure a mountain can be hipster anyway.  So I guess I will take by PBR and go to a different mountain with old trails that are way better than the new trails.  You know, the ones that were blazed before it sold out.

For more information visit the Land Trust of North Alabama.