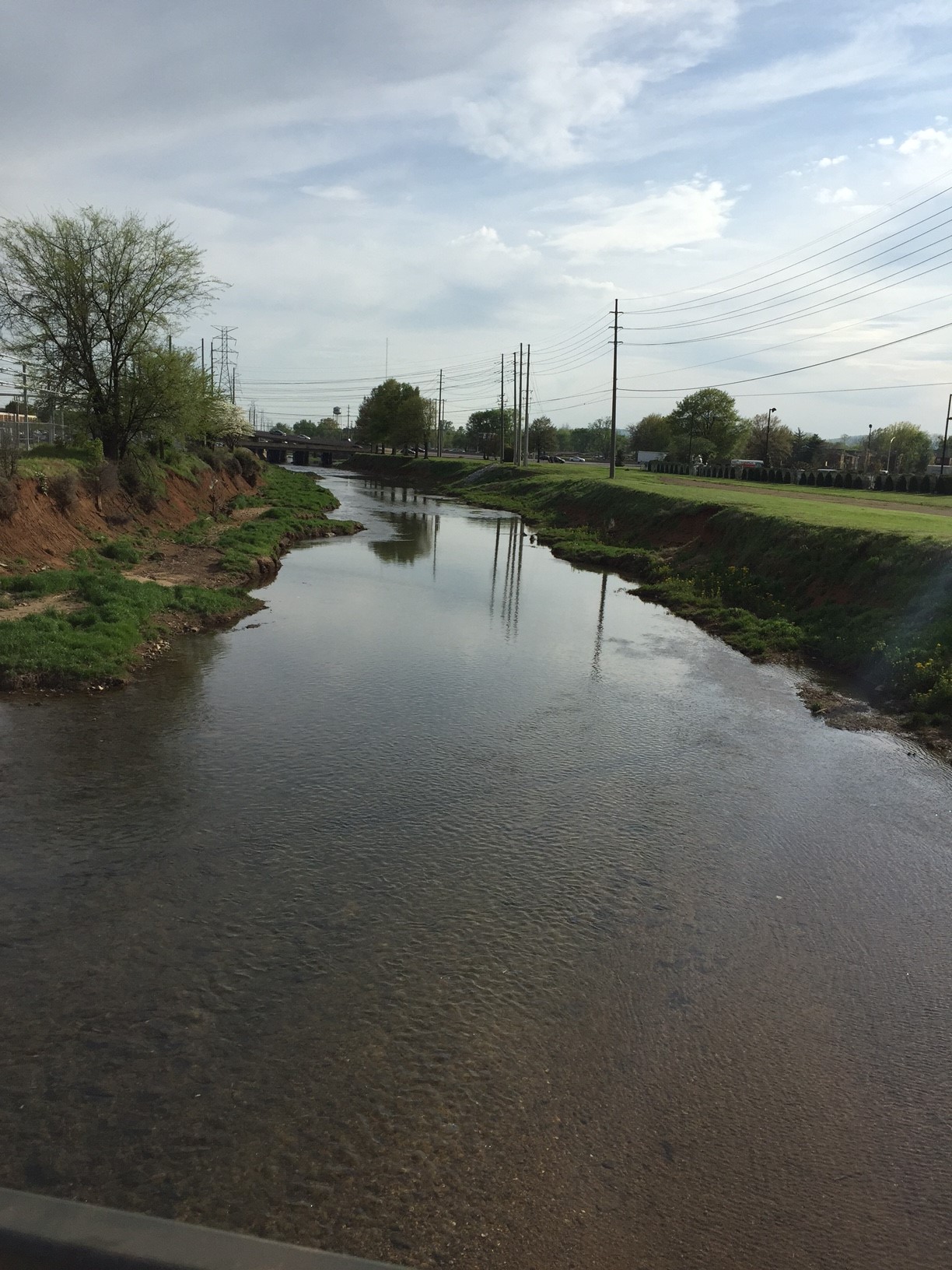 Fagan Creek Veiw from the VBC

For those of you not familiar with the Big Picture initiative it is Huntsville’s attempt to reach out to its residents and understand what is important them.   Their website says it better than I could ever hope summarize, and believe me I tried: “Our Plan – Formulating a transparent, breathable plan with the ability to guide funding and policy decisions. This plan will be continuously updated each year to best reflect changing conditions.”

Last week I was privileged to have the opportunity to be a part of the their focus groups for Huntsville's greenway network. Having spent countless hours reading AL.com articles, emailing city officials, and studying Google Maps it was nice to finally be in front of the key decision makers.

The meeting started with everyone introducing themselves and choosing from a list of eight greenway connections which one they would most like to see. Our Choices were, Aldridge Creek, Smithers Mountain, Bankhead Parkway, Holmes Avenue, Crossing the Parkway, Indian Creek, Brahan Springs to John Hunt park, downtown to Lowe Mill, and a late entry from the Hot Wing Runner, Spacewalk.

When the dust settled Aldridge Creek Greenway stood alone, with the Downtown to Lowe Mill connection and Crossing thePparkway tied for second. I was the only one in the room who voted for connecting Indian Creek to Providence.

Aldridge Creek: Currently it runs from Ditto Landing to just south of the Sunset Branch where it connects to the sidewalk along Bailey Cove. Recently the city announced a new project that will add a section from Weatherly to Eslinger ending at the Valley Hill Country club. This announcement leaves me with some burning questions the biggest of which is what about the 1/8 mile section from where the Greenway currently ends to new section that starts at Weatherly and why build another unconnected section just like Altwood Linear Greenway?

Click here for map of the Aldridge Creek Greenway with this proposed new addition.

Marie Bostick, former city director of city planning and current director of the North Alabama Land Trust, weighed in the issue.  She said, based on multiple assessments, building that 1/8 of mile section is extremely cost prohibitive because of various utilities and gravity fed storm and sewer drainage that would require to be moved which drives the construction cost skyward.  For what it would cost to build that small section the city could build 20 miles of greenway somehwere else. Until another cost effective solution is brought forward you will have to use the Bailey Cove sidewalk to Weatherly road access this newest section.That of course still leaves us with the issues of Valley Hill Country Club who in the past has been reluctant to have a Greenway run through fairways. It was said that they are under new management who may or may not be amenable to allowing that now. Other ideas discussed were routing the greenway north or south along the edge of golf course or creating a dedicated running lane through city streets to connect it to the Altwood Linear Greenway.  Another issue that will need to be addressed is access to this newest section at its northern most end. With the plans calling for the greenway to run alon the west side of Aldridge Creek you cannot access it from Chatterson on the east bank and there is no offical way to access it from Eslinger on the west side. Keep in mind too the Altwood Linear Greenway is on the east side as well and if the two section can ever hope to become one the Creek will have to be crossed again.

Currently the Big Spring greenway starts in Big Spring park, imagine that, meanders through the park and then between the VBC and the Embassy Suites where it ends with beautiful fountain and a pretty view of a railroad trestle. 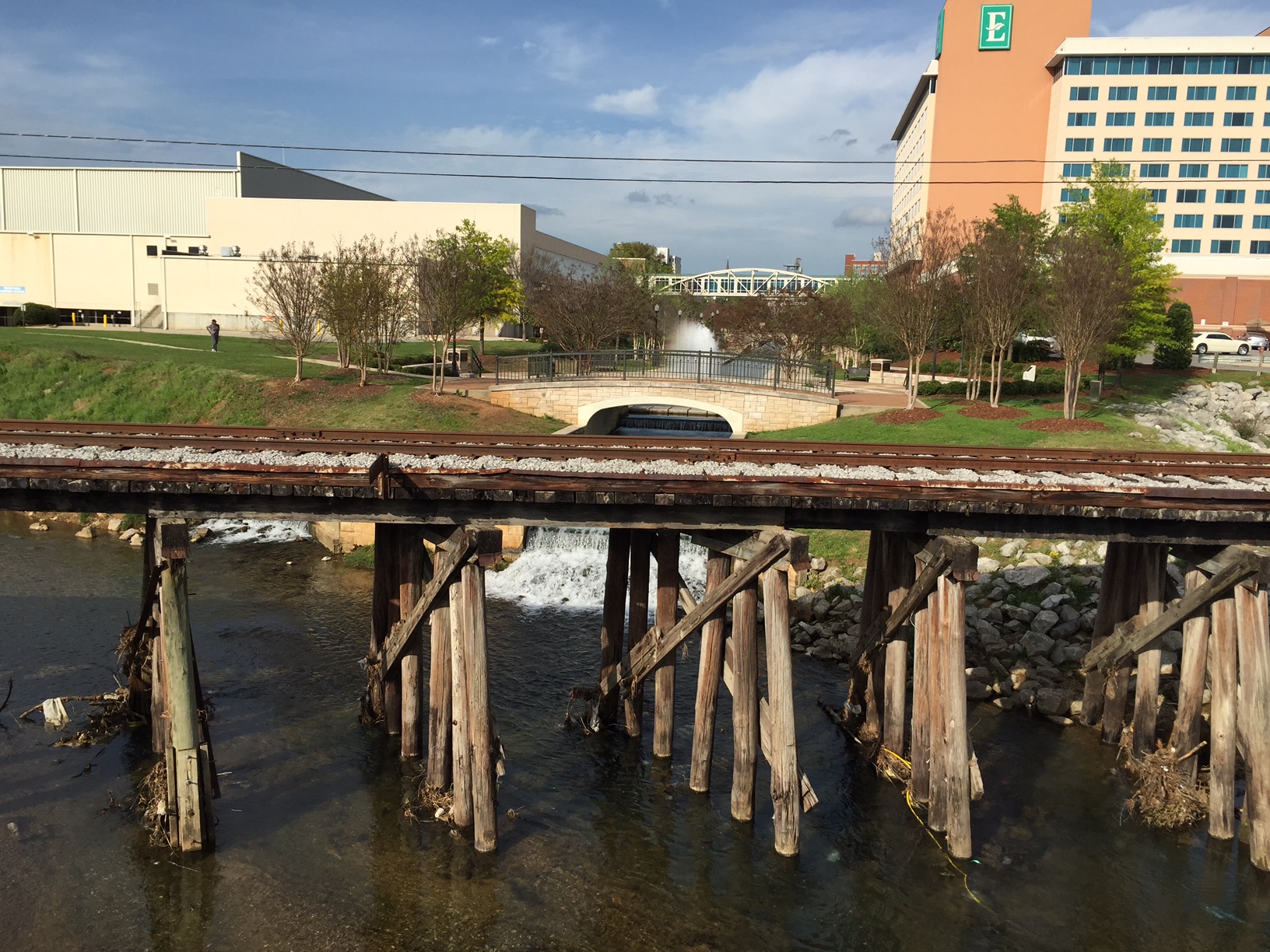 A few ideas were discussed about how to build a connection from where the greenway ends today to Lowe Mill including diverging North by following the Heart of Huntsville and then heading west on Clinton to Seminole.   After some discussion it was the groups opinion that if you are going to build it, build it right and go straight down Fagan Creek. Click here for a speculative map of greenway. The city has done no assessment of this proposed route but from a Google Maps Street View there appears to be plenty of space for a pedestrian underpass. If one of the goals is to promote pedestrian traffic from the Embassy Suites, VBC, and the Proposed Constellation Development to Lowe Mill making the route anything but as direct as possible does not accomplish that. This would be the first section of the proposed Pinhook Creek Greenway.Since this route goes right under Memorial Parkway and Governors drive, which is one of the busiest intersections in the city, it will be a showcase that the city’s greenway system to the thousands of citizens and visitor that traverse those roads every day.  Amenities like these are a big part of what attracts high quality talent to our city and having it on display will only help recruiting efforts. Related to this is another extension of the Pin Hook Creek Greenway that would start at Clinton Avenue and would merge together with the Big Spring Greenway. Click here for a speculative map of the proposed greenway. This proposed 2nd piece of the Pinhook Creek Greenway creates a route to the new Clinton Avenue Performing Arts Park (former Stone Middle School). It was also mentioned that Clinton Ave is a candidate for a “Road Diet” from four lanes two.   That would allow the city to create bike and running lanes on either side of the street and slow traffic down increasing safety. When complete you could run, walk, or bike to and from Lowe Mill, Stone Middle School, and Downtown.One of the most crucial things that all of this does is it provides a safe way to cross under the parkway. This along with the announcement of the greenway near Cabelas  that will go under 565 you really start to see what could one day be a full east to west connection.

A proposed Rails to Trails opportunity that uses an abandoned railroad bed from near downtown to the North Alabama Railroad Museum. I am trying to get clarification as to where this prposed route.  I believe it runs along the old Louisville and Nashville Railroad Line.

This was one that I had not heard of before but it was described as a good bang for your buck opportunity. Old railroad beds make great trails because a lot things you need to do to build a greenway has already been done. There are countless examples of where this has been successfull all over the country. I grew up near the Soo Line Trail which is an awesome network of over 200 miles or old rail roadbeds converted to be used by pedestrians and motorized vehicles including snowmobiles, because that’s how Minnesotans roll. This isn’t the only Rails to trails effort around, if you follow the railroad past the Museum you can see where it runs in parallel to Winchester road.

It’s my opinion that building this greenway would be a great step in the revitalizing of North Huntsville by providing a link to downtown and safe way for students and professors to commute to and from Alabama A&M. Countless studies has shown that amenities like this increase safety and home values of the communities that they are connected to. It’s not the be all end all but is a step in the right direction.

You may also heard about a proposed B&L railroad greenway from Ditto Landing to downtown. Click here for a map of the proposed route. This is technically not a rails to trails project because the rails are still used and cannot be convert to trails. Since I do not have all of the details about how this would work I will refrain from speculation. What I do know is that the rail line is seldom used, daily at the most, for one company, and trains move quite slow near 5 mph. Full disclosure, I use to work for the aforementioned company but not that particular division.

This isn’t really a Greenway so much as a mini Appalachian Trail that would run from Ditto Landing to Monte Sano. Local trail running enthusiast Cary Long championed this and I plan to write more about it soon. Stay tuned.Other random information: Building one mile of Greenway costs about 1,000,000 dollars. Since most greenways are built on flood plans it is important to design them properly with the right grade and drainage or as current director of city planning Denis Madsen said it “you will not have a greenway in two years.” Paraphrasing Marie Bostick we build a Cadillac greenways. 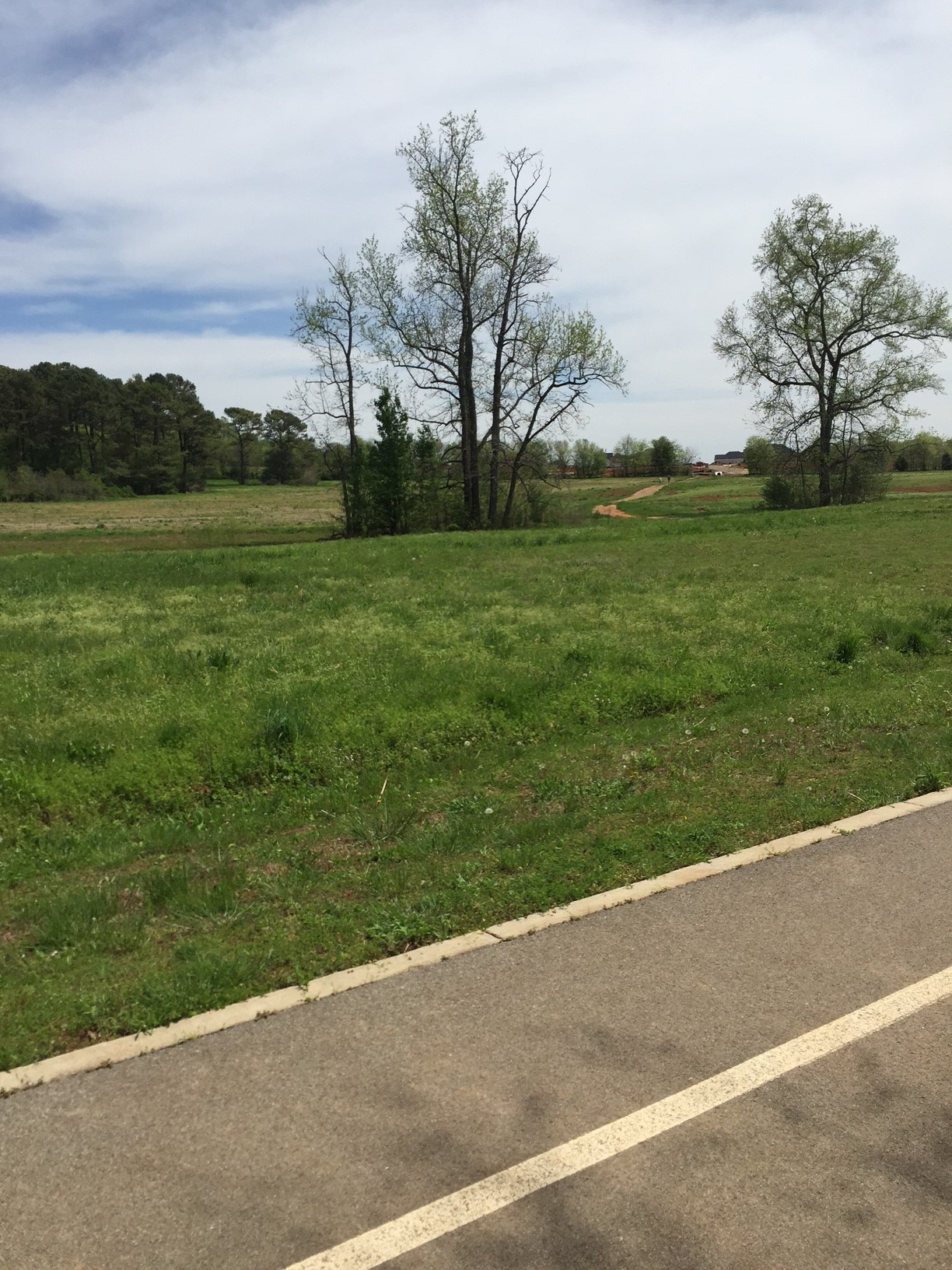 Gravel Path Leading to Midtowne on the Park

There was discussion that if certain situations just building a gravel path extension as a place holder would make sense. Perfect example of this is the gravel path that leads from the Indian Creek Greenway to the Mid Towne on the Park Development. Indian Creek would be a great candidate for more gravel paths to create a connection to the Providence Greenway after the new bridge is installed when US Highway 72 is converted from four lanes. This PDF from the Alabama Department of Transportation shows the proposed bridge with a pedestrian under pass that allows for the connection of the two pieces.   Volunteer and Partnership opportunities are not something a city government is set up to do. That is where a group like the Land Trust can act as a powerful advocate. What they can do that the City of Huntsville cannot do is fundraise, solicite corporate sponsors and organize volunteers. Can you imagine a sign along a new section of trail or greenway that saying “This ½ mile is brought to you Polaris/Boeing/Remmington.” In other cases I envision Eagle Scout projects, community outreach programs, or volunteer groups working together to enhance and grow the network. There are plenty of parks built by civic organizations such as the Knights of Columbus, Lions Club, and Kiwanas to name a few, so why not a section of Greenway? Hopefully there will be more to come on this soon.