One of the coolest spots on the Huntsville city greenways.

Aldridge Creek was first greenway built by the city of Huntsville and it is the longest, and most used greenway in the city though I have no statistics to back up that last claim.  It longest section runs along Aldridge Creek from Ditto Landing ending a 1/4 mile before Weatherly Road on Bailey Cove Raod.  The other section know as the Altwood Linear Greenway is 0.89 miles running along Aldridge Creek as well from the North end of the Valley Hill Country Club to Four Mile Post Road.  There is a third planned and funded section that runs from Weatherly Road to Eslinger Drive ending at the south side of the Valley Hill Country Club.  I do not include the Jones Family park as an unconnected section of the Aldridge creek only because the official city plan doesn't show the greenway going north of Four Mile Post.  But for all intensive purposes this can be considered a fourth unconnected section. 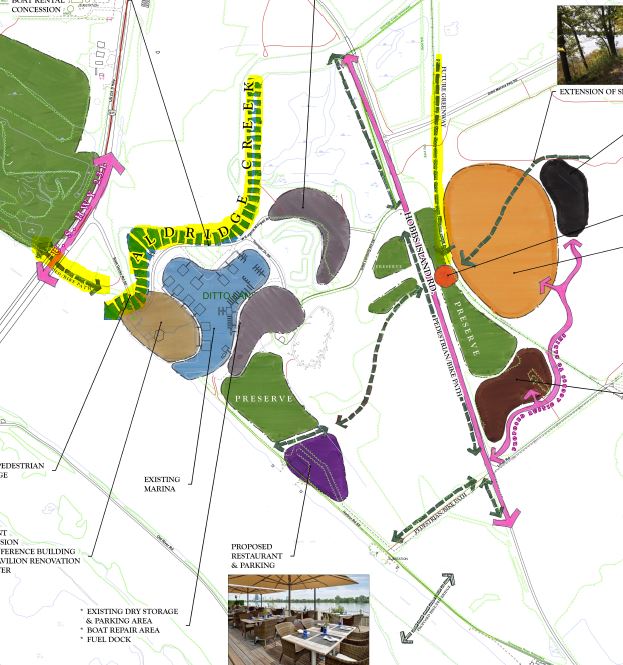 In the spring of 2015 the city unveiled their master plan for Ditto Landing which included a lot of good things for runners.  As you can see from the picture above the master plans calls for extending its southern end all the way to the Tennessee river and then adding another multiuse path under HWY 431.  The plan calls for addtional multiuse paths all around Ditto Land connecting up to the Tennessee River Greenway as well. Future phases of the plan also call for multiuse bike path that goes under US 431 to another undeveloped city owned parcel of land that is earmarked for recreation.

One of the interesting parts of the plan is a new greenway that would branch off to the south using an existing railroad.  It has been suggest that this rarely used rail line could be be converted in its entirety into a greenway.  If that were to come to furtion it would run from Ditto Landing all the way to Downtown Huntsville.

With the anouncement the of the construction of a new segment of greenway from Weatherly to Eslinger the obvious question is what the about that short 1/4 mile from where the main section ends to the new section.  In my Greenways: Big Picture article spell it out in more detail but the quick answer is that the relocation of existing utilities and storm drainage is cost prohibitive.

The next big connection hurdle is Valley Hill Country Club who's fairways are preventing a connection to the Altwood Linear Greenway.  There are many possible ways to solve this problem none of which I can speak to the feasibiity of.  I like the idea of construcing the greenway to go around the primeter of the golf course.

The third and final connection would be to Jones Family Park who's greenway is on the opposite side of AldridgeCreek from the Altwood Linear greenway.  With runners and bikers being able to use existing sidewalks to get between the two I don't see this as being a big priority for the city.  If and when the Four Mile Post road bridge over the creek gets replaced that may present an opportunity for a pedistrian underpass and connection between the two.