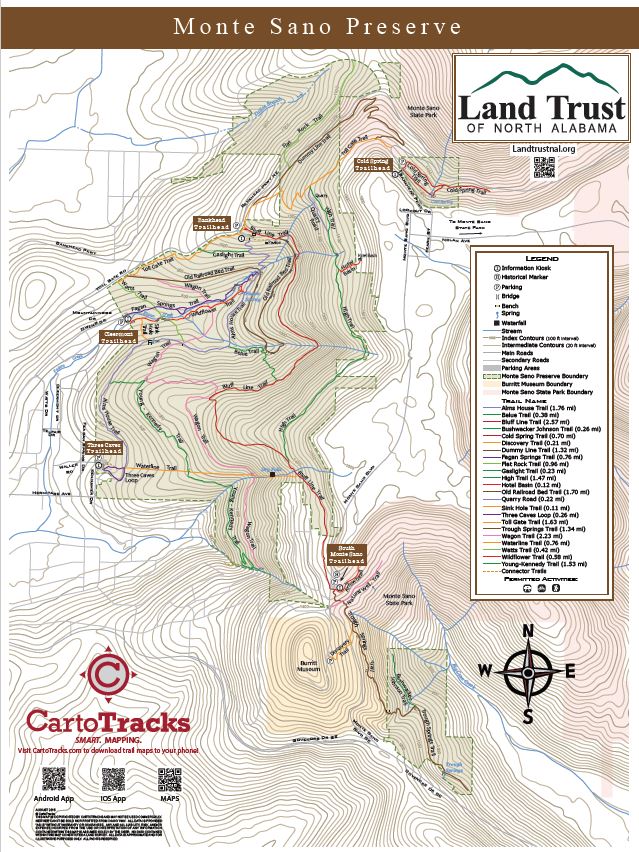 Unbeknownst to me, the Land Trust released new maps for their five nature preserves back in early September (2015) as well as a new trail app.  After comparing what was to what is here are the changes.

According to the director of the Land Trust, Marie Bostick, the maps were made by a local mapping firm who also developed an app that you can download these maps from and then track your hike/run and attach pictures. The app is free for Land Trusts members. I have not tried it out myself but will soon and let you know how it is. You can find all of the new maps on the Land Trust's website.

There are only small changes to most of the maps excecpt the Monte Sano Map which has some significant changes.  On the old Monte Sano Map, the Flat Rock Trail used to end in the open lot across the street from the Land Trust trailhead on Bankhead Parkway which is not owned by the Land Trust. I would guess that's the reason on the new map Flat Rock takes over the Panther Knob trail and now ends at Dummy Line where it now stays within the Land Trust boundaries.  With this change the only surviving Panther Knob trail is the one that summits Logan Point and not Panther Knob.

Other changes include trail consolidation. Wagon, Alms Wagon, and Annandale trails are now one single trail called the Wagon Trail.  The Toll Creek and Alms Creek trail are now the called Watts Trail. The Cold Spring and Cold Spring Loop Trail are now one just one Cold Spring Trail. There were a few additions as well. The Quarry Road is now its own trail instead of a loop off the High Trail and two totally new trails in Belue and Gaslight.

I asked Bostick about the new trails names and she told me that Belue Trail was named after an Engineer on the old rail line, Watts Trail was named after the family who donated th Land Trust, and Gaslight a pick up from the road across the street. She also told me that on the trails where the names are being changed there will be new diamonds and some trails may have both old and new markers during the transition.

On Rainbow Mountain, the Spring Trail no longer officially goes out to the Oakhurst Drive cul-de-sac, though that part is noted as a connector. Also, the Wild Trail has grown a branch which comes out between the Balance Rock and the Baby Balance Rock, which is also an addition to the map.

The Belvins Gap saw only a few changes one of which was to the Bill and Marrion Certain Trail. The new map reflects the changes on that trail from some recent maintenance which rerouted it around a large limestone formation.